Zodwa Wabantu, Africa’s most popular nude dancer, has been deported from Zambia where she was due to perform.

The government believed her lewd performance in Lusaka, the capital of Zambia, would have been contrary to “public interest”. She had previously been banned from Zimbabwe.

The South African nude dancer and entertainer whose real name is Rebeca Libram was due to perform during the launch of a new album titled “Pandemonium” by Zambian musician Karasa Karayo.

Wabantu was reportedly detained upon arrival at the Kenneth Kaunda International Airport at 9 o’clock on Friday night, and deported the next day.

The Zambian government had earlier said Wabantu would not be granted permission to enter the country to perform because that would be contrary to national morals. 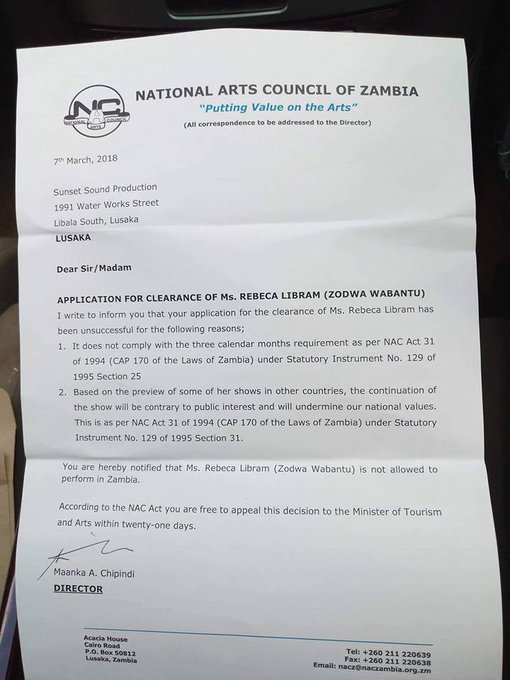 The National Guidance and Religious Affairs Minister Godfridah Sumaili statement was followed by another one from the National Arts Council who told the promoter, Sunset Sound Production, that she could only attend as a guest because allowing her to perform was against “public interest and national values”. “I have just confirmed with South African Airways that she was deported and left for South Africa aboard the 07:20hrs flight (today),” Sunset Sound proprietor Lucky Cheelo Munakampe was quoted as saying by a private daily, The Mast.

Zambia’s National Guidance and Religious Affairs Minister Godfridah Sumaili told state-run newspaper The Times that the government would not allow Zodwa to “strut her stuff anywhere in the country”.

“It is clear we are a Christian nation and we uphold the values of morality and ethics… as a nation, we cannot allow such. I mean, someone performing without underwear, there’s no morality there,” she was quoted as saying.

Wabantu has become famous to some, notorious to others, for her provocative dance  steps with no underwear, and moves that drive men and women crazy. Many describe her as a dancer sexually or sensually bombing the world, or the devil incarnate sent on earth to destroy millions of souls.

Recently, she was banned from performing in Zimbabwe and several other countries are wondering whether she should be allowed to perform there.

At some events, she removes her underwear before performing, or while she’s performing, as thousands look to see deep inside.

At several performances, security guards had to keep the crowd away from devouring her with their hands and eyes.  Yes, she’s seen as a super star by millions, and the devil incarnate by many moralists.

32-year old Zodwa Wabantu, whose real name is Zodwa Libram, is now a global sensation. Reporters chase after her and she’s booked every minute and is smiling to the bank. There are so many offers that she can no longer keep up.

Zodwa was born in Dlamini, Soweto and later relocated to Rockville. She left her home when she was 16 and started hustling and living with a friend for a while.

According to The Sun of South Africa, Zodwa says she was raised by her late grandmother, Maureen Ndaba and started working at a now defunct nightclub called The Rock where she was a bar lady. After she failed matric, she studied for a six-month call centre course.

“I was trying to hustle for myself and I tried to make a better life for myself. After working as a bar lady, I felt that I needed a better job. Since I failed my matric, I studied for a call centre course and I managed to get a job at a call centre,” she says, according to The Sun.

Zodwa says that she went to Durban through her job and that’s where she started her own business of leasing flats, and she rented them out to students.

“I then became a regular at Eyadini hangout spot because of my love for good music and dance. I am now part of the Eyadini family. I don’t depend on a man financially, but I’m pushing for a better life for myself and my 11-year-old son, Vuyo,” she says.

Zodwa says that she is proud of her body and she does not like putting on underwear as she feels comfortable in her own body.

“My boyfriend knows that I don’t sleep around. When I’m dancing, I embrace my body and men appreciate my moves. But I am not there to sleep with them,” she says.

Zodwa, who was recently roped in as an ambassador for an energy drink, says that her mission is to get into the world of acting and TV presenting as she wants to build a career in the industry.

“I am a hard worker and I know that I am destined for greater things. I want to push the boundaries to get on TV screens and entertain people,” she says.

Zodwa says that she wore that black number at the Durban July with pride and confidence.

“I am not looking for fame and for me to wear my black dress showing my assets was an act of embracing my freedom. I went to the Durban July to work and I didn’t go there for publicity or to pose for pictures. Eyadini had a marquee and I had to look after our clients,” she says.

Simon Ateba
Based in Washington, District of Columbia, United States of America, Simon leads a brilliant team of reporters, freelance journalists, analysts, researchers and contributors from around the world to run TODAY NEWS AFRICA as editor-in-chief. Simon Ateba's journalistic experience spans over 10 years and covers many beats, including business and investment, information technology, politics, diplomacy, human rights, science reporting and much more. Write him: simonateba@todaynewsafrica.com

Statues of slave traders and racists who sold or murdered millions of Africans, native Indians and others being beheaded or vandalized around the world

U.S. Capitol put on lockdown over unrelated fire nearby as paranoia jumps ahead of Biden’s inauguration

Trump to issue 50 to 100 commutations and pardons before leaving White House, including for rapper Lil Wayne

In a farewell message on Monday, First Lady Melania Trump, said "no words can express the depth of my gratitude for the privilege of having served as your First Lady."She urged Americans "to always choose love over hatred, peace over violence, and others before yourselves.""To all the people of this country, you will be in my heart forever," the outgoing First Lady said in a...
Continue...

Today News Africa is a US-based international news organization focused on US-Africa policy and breaking news. Our goal is to provide truthful and exclusive stories to a diverse audience across North America and the African Continent.

© This material may not be published, broadcast, rewritten, or redistributed. ©2020 TODAY NEWS AFRICA, LLC. All rights reserved.